No, kidding. (Well actually im not but I'll tell you stories anyway)
In the am we made a quick visit to folks del knew thru work and by time we hit the road the rain had started. And it did not let up for even a second the entire day! We were riding thru and past what we assume are gorgeous mtns but alas, the clouds wouldn't let us see them.
As a pit stop to warm up, we ended up at a rural grocery/general store kinda in the middle of nowhere. There we met the ma and pa running the place. An interesting couple that stuck smack dab into the centre of my alaskan stereotype. The store was full of taxidermied animals and furs hanging on the wall, beside all the hunting photos. A couple of men came in while we were there...bought smokes and beer....
When we arrived at the glenallen turnoff we stopped at the visitors centre and met a young couple who had been travelling on their bikes for years already! The man was dutch and said he started out 5 yrs ago!
The rain continued as we headed down toward McCarthy. By time we reached Chitina at the end of the paved road we were soaked! And to top it all off..there was no gas station...contrary to the milepost book we were planning off of. Thankfully we found a man at the tire repair shop who was able and willing to see us some gas. After a cuppa to warm up, we headed down the unsealed road toward McCarthy. ..a dirt/gravel road full of potholes, washboard and mudslides that brought trees down. As the clouds seemed to sock in even deeper...we decided 120miles on this road for a destination we wouldnt even be able to see (the weather forcast was the same for tom) just wasnt worth the misery. So we turned around and headed back into glenallen...arriving back at the little visitors centre where the super nice lady helped us find a lovely b&b where we got deliciously hot showers and we're attempting to dry out our saturated gear.
"Oh the places we will go" (or not go in this case) 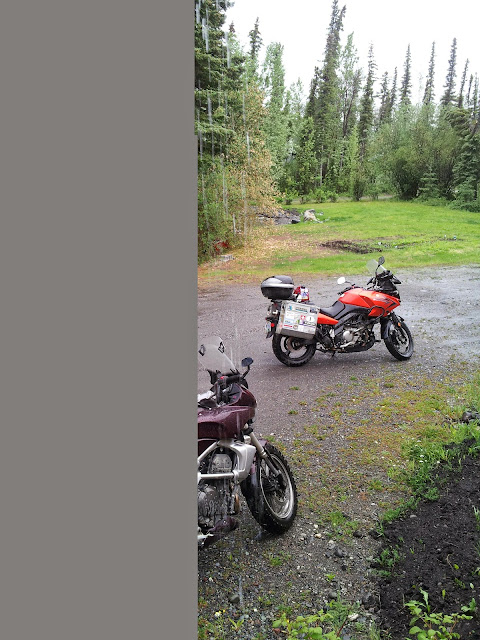 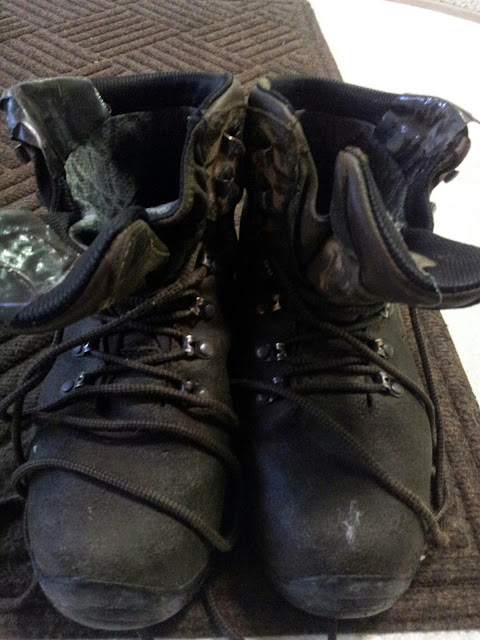 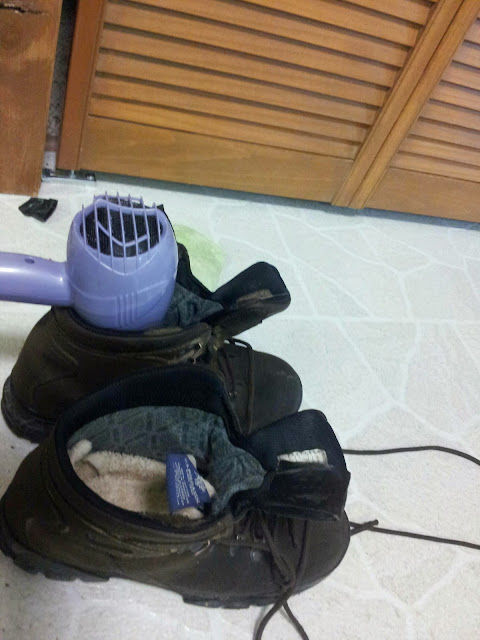 Our day started under a canopy of cloud and drizzle. But within 10 mins of hitting the road we spotted a mama grizzly and two young cubs by the side of the road. As I geared down to stop, mum reared up for a min, but after I stopped and pulled out the camera, she seemed to settle down and just walked her babies into the tree line. However...after a short video I realized she was staying right along the tree line and I got to sit there and watch these three meander back out into the open. (Sorry folks, for those photos and videos you are just going to have to wait)

The rest of the morning we spent visiting mother nature's car wash, trying to get off the dust and bugs from previous beautiful days.
We made a pit stop at a gas station/cafe for a quick warm up and became a spectacle for a bus load of touring americans who apparently had never seen motorcycles like ours.

The roads at this point deteriorated to frost heaves that I was bottoming out on, and construction zones of slightly packed gravel.

By mid afternoon we finally broke free of the cloud hanging over us and came to the border of Yukon and Alaska. Again we were greeted by a very friendly customs officer and amazingly superb highway conditions.

We soared the rest of the day into Tok and snagged an awesome cabin at an amazing biker campground run by a freakin stellar lady: thompson eagle campground. If you're ever in tok, you MUST stay here.
So here we sit, sipping a beer I carted from spirit lake, in the sunshine, with hardly a mosquitoe, grateful for another safe day of riding . 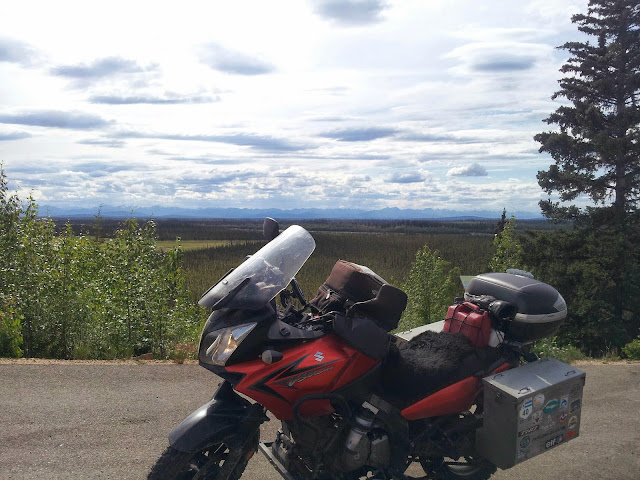 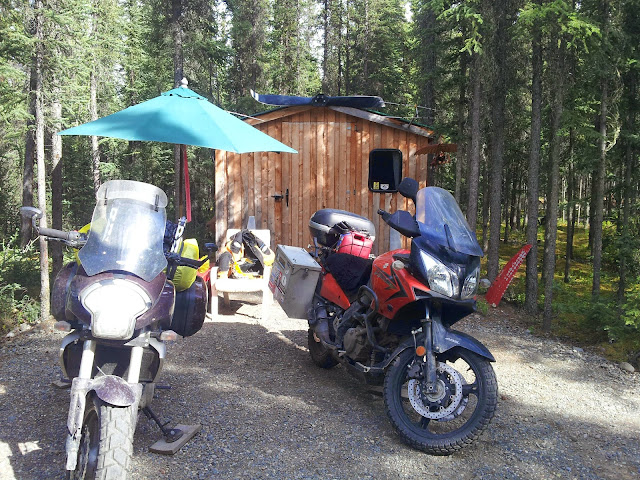 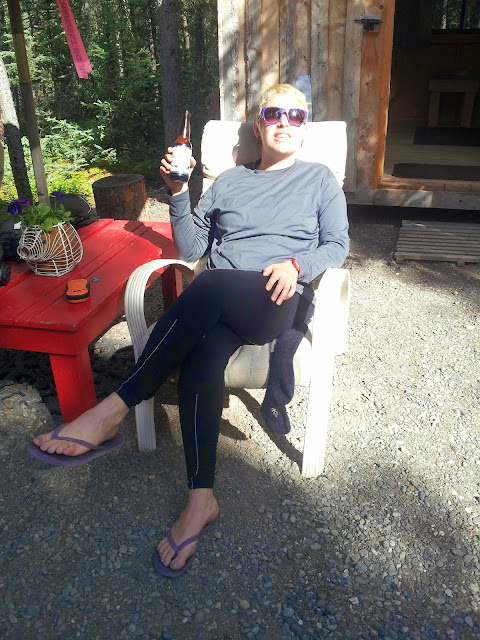 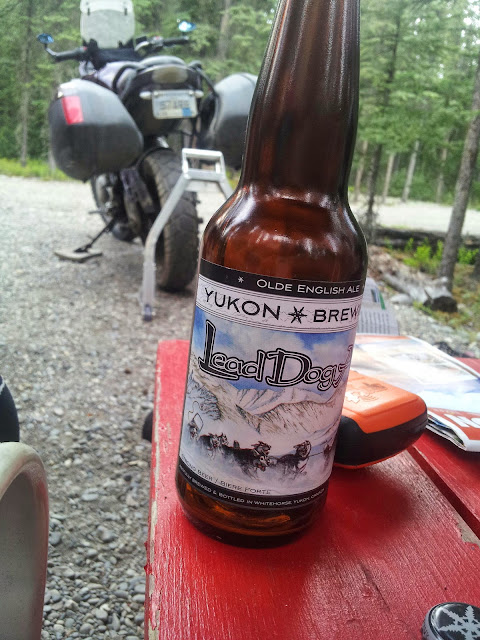 Posted by Nurseneuf at 8:44 AM No comments:

Ok. Time for a little catch up due to lack of wifi and charging abilities yesterday.

Day 4:
We left hyder (where we had to stop at the canadian border crossing to present our passports. Which we didnt do going into hyder, usa. She wanted to know if I had bought anything in the US. I wanted to say "have you been to hyder?" .) Hyder seemed to be a grouping of delapitated buildings, mostly closed/shut down and one hotel and one place to eat! Stewart, on the other hand had several cafes, stores, and even a toaster museum. Yup. I know you're jealous.
Moving on....
We left the valley under a blanket of clouds and some rain but after about an hour, the skies cleared and we ride thru stunning mountains and along lake after lake!
After lunch in dease lake, the road started going to pot. Literally.  Pot holes galore! Pretty brutal on the back, but then we met a young korean from vancouver doing the ride on a crotch rocket loaded down. I felt the need to stop complaining and buck up a bit. ;)
We made it to watson lake by supper time and had a wander thru the expansive sign post forest where del added our hesston college touch.
We camped just outside the town and had our first taste of northern mosquitoes! Del s attempt at using citronella generally failed but he did give it a valiant effort . I, on the other hand, moved on to 30% deet and toques.
Somehow we both managed a decent nights sleep in our tents, undisturbed by animals. Speaking of which, at this point we have a dismal count of sighting.
Bears (black): 2
Beavers: 1
Caribou, elk, moose: warning signs
Actual Caribou, elk or moose: none.
I am mildly miffed and irked at the seeming lack of roadside wildlife. Or even roadkill! Maybe all our animals are finally learning to use the wildlife walkways!

Day 5:
We were blessed with a dry night and clear sunny skies in the morning. This was the first day on the official alaskan hwy. We wound our way across the yukon/BC border thru snow dusted mtns and across the continental divide. (We stopped for petrol and coffee and managed to catch the crazy shoot out between chile and brazil today! )
Just before whitehorse we turned south and made our way thru the most scenic drive yet I would say. To skaguay, ak. turns out we missed the one vehicle ferry to haines by 15 mins! ! And next sailing being 3pm tom! Unfortunately, our schedule does not allow for that delay, so we turned around and went back to the yukon....towards Whitehorse again to go around instead.  What kills me is that both times going into the US has been a cake:
"Where are you going?"
"Prudhoe bay eventually"
"Great!  Have a great trip"

Coming back into canada:
"And how do you know this guy?"
"He is a friend thru my brother who also lives in kansas"
"And did you buy anything in the US?"
"No...we actually just missed the ferry so I was only there for less than an hour"
With reluctant suspicion..."oookkkkk....go ahead"

Today we crossed between yukon and BC three times and then of course across and back from alaska!!
We have now foubd ourselves at the spirit lake resort, where the water smells like sulfur but at least we can charge all our electronics (which I now realize is a bit much) and post this on wifi we can get outside our room door. Ahhhhh. Yukon.
(Two new places I've never been...alaska and yukon! Whoop!) 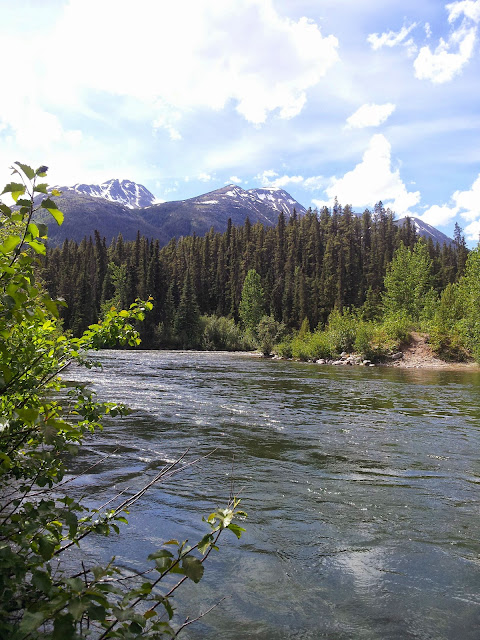 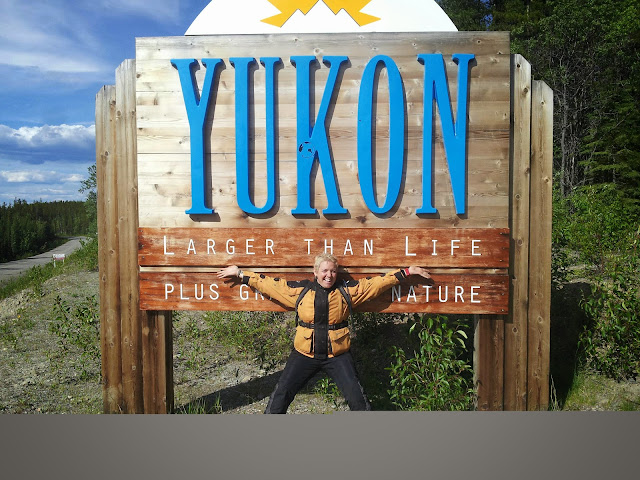 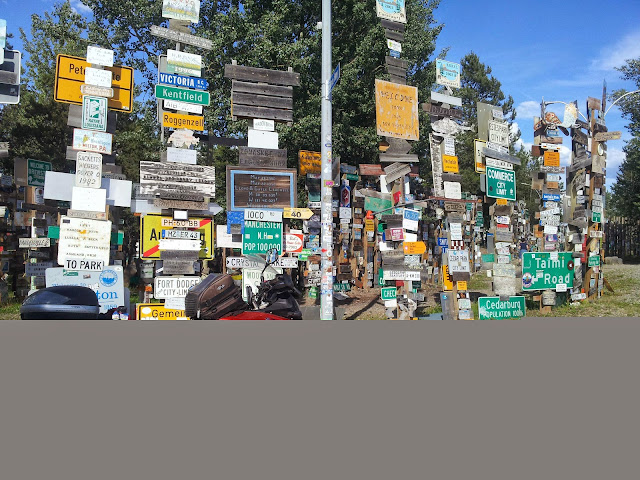 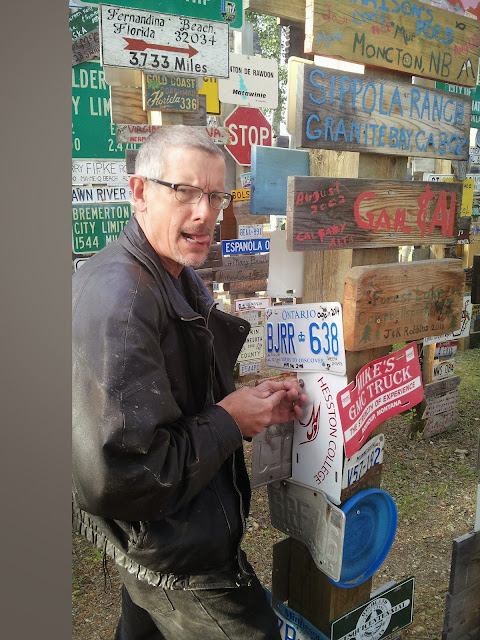 Posted by Nurseneuf at 11:13 AM No comments:

Today dawned as another gorgeous sunny warm day. We meandered thru the town of smithers, trying out the dutch pastry cafe for breakfast. Had a short stop at k'saan village...of long houses and totem poles. And finally turned north on hwy 37, ending up in stewart bc and crossing over into hyder alaska. (No passports required here) we took a little jaunt outside of town, riding 22 miles down a gravel, cliff edged, snow lined road (sounds good right??) To salmon glacier. The sun was bright and glacier was stunning.
Our day ended with sampling alaskan beer and halibut for supper. Tonite we're staying in a hotel...a far cry from our beautiful hosts so far but it'll have to do. 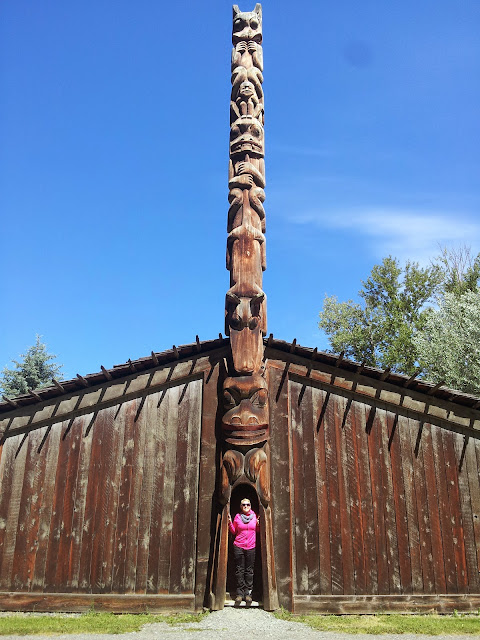 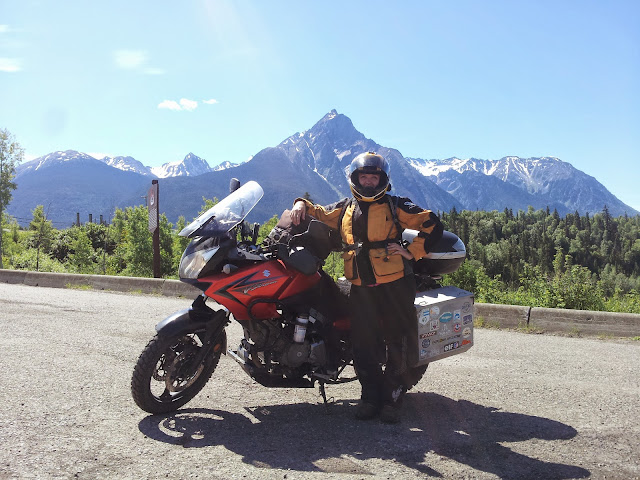 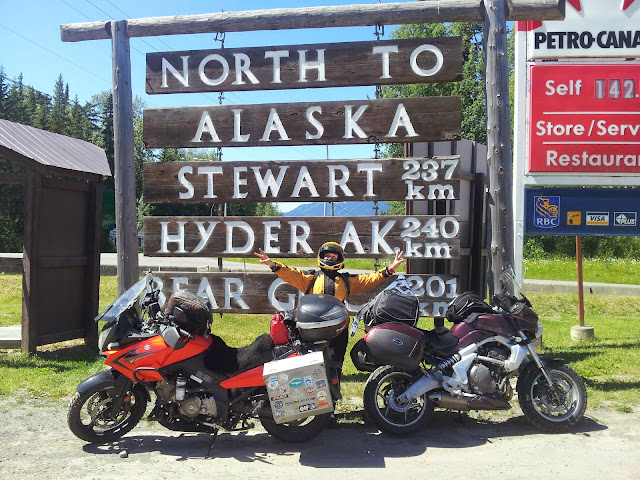 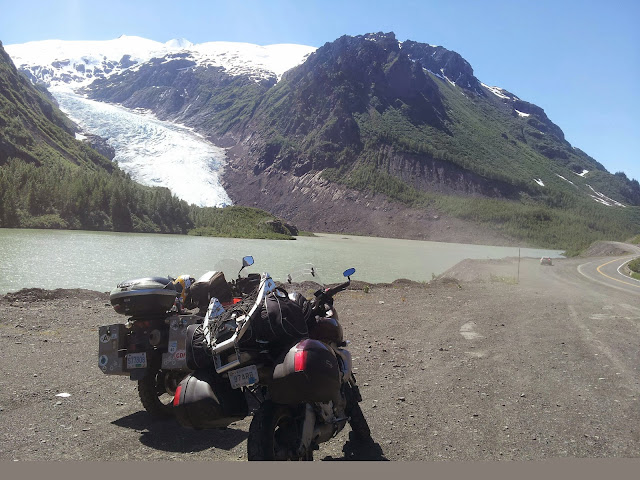 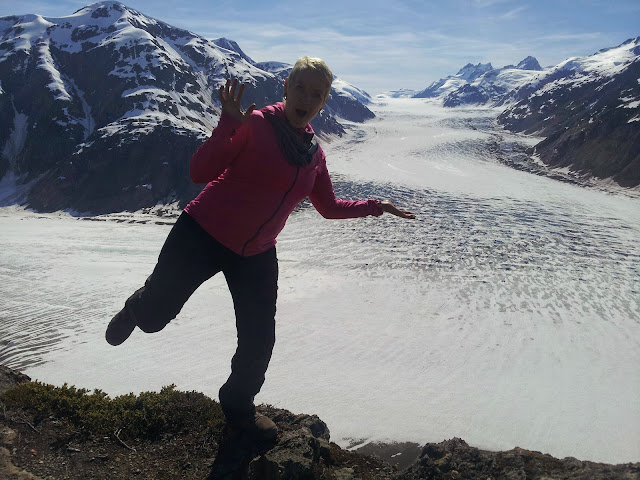 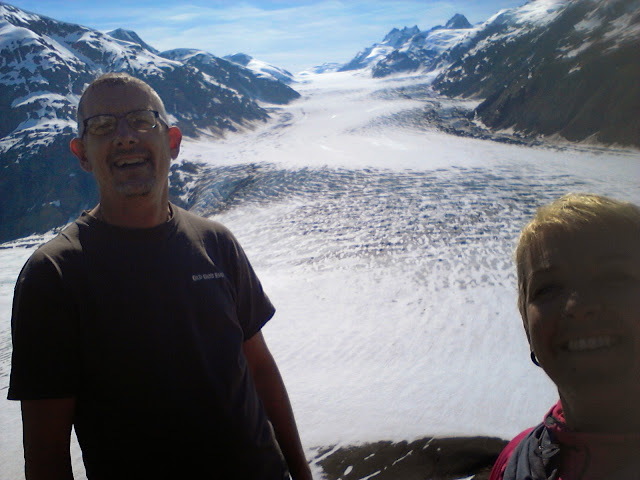 Posted by Nurseneuf at 9:11 PM No comments:

Today we were blessed with beautiful sunshine all day. We had a relaxing day of stopping by fraser lake, lunch in burns lake, and even taking the time for a photo op with the worlds largest fishing pole! In a small town called houston where they also had an electric car charging station!
We finished our day just outside smithers with some family connections again, where Whitney and Wilma made us feel so welcome! Besides the amazing view from their yard , we were treated with moose burgers, apple pie, a canoe ride on a pristine lake surrounded by snow capped mtns and filled with loons, and a campfire to top the eve off. Its as amazing as it sounds . 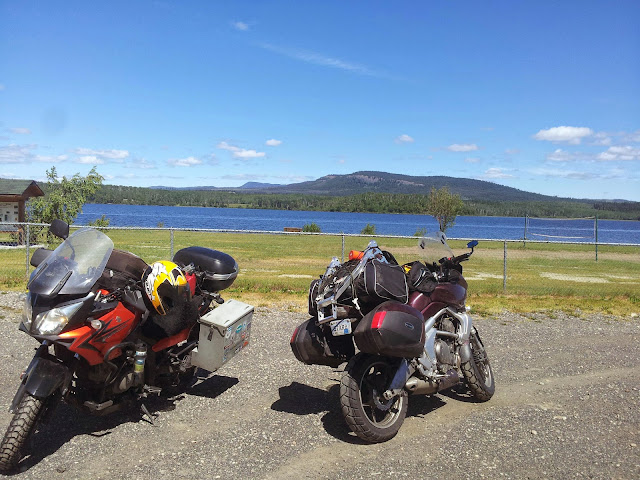 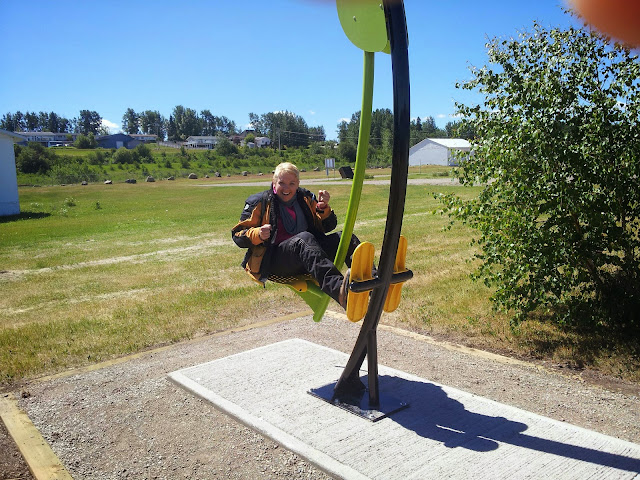 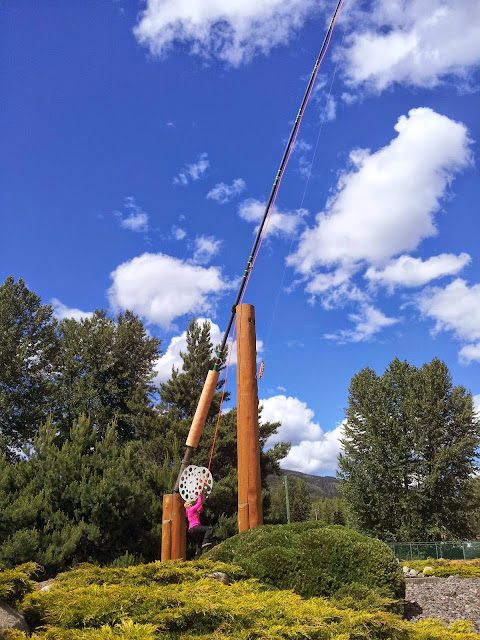 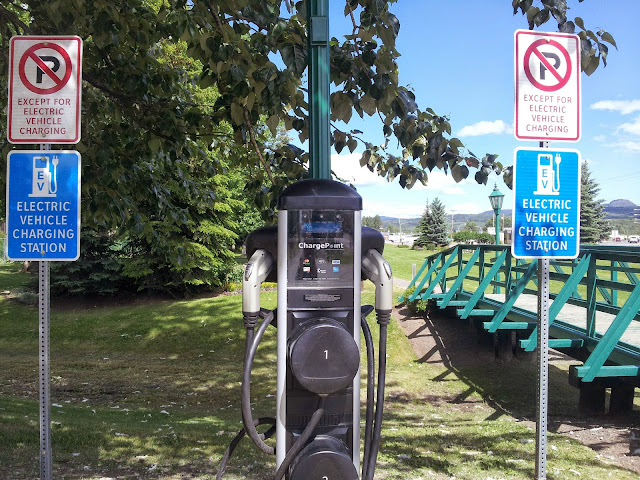 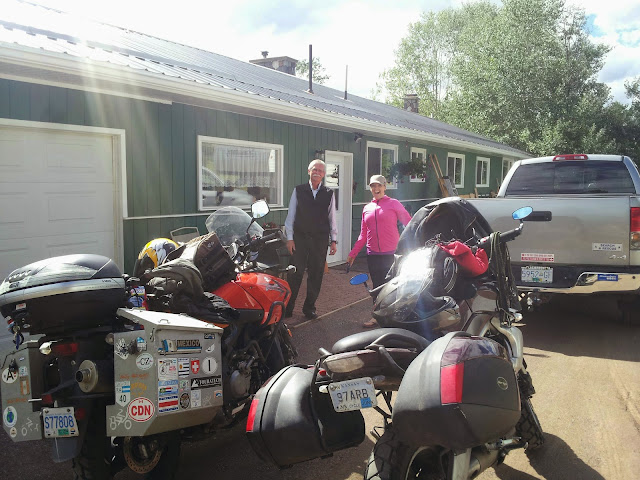 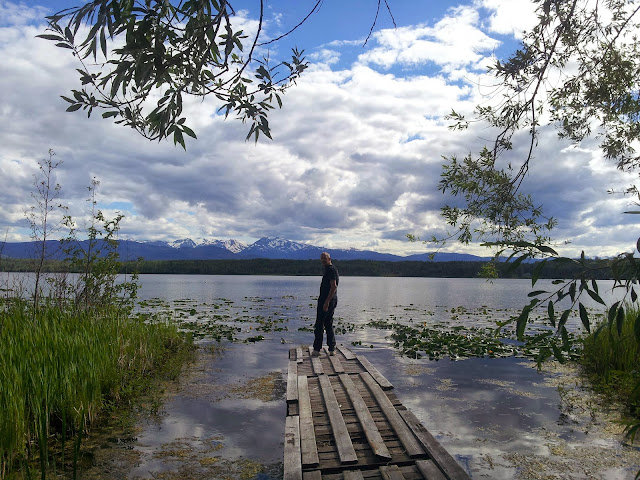 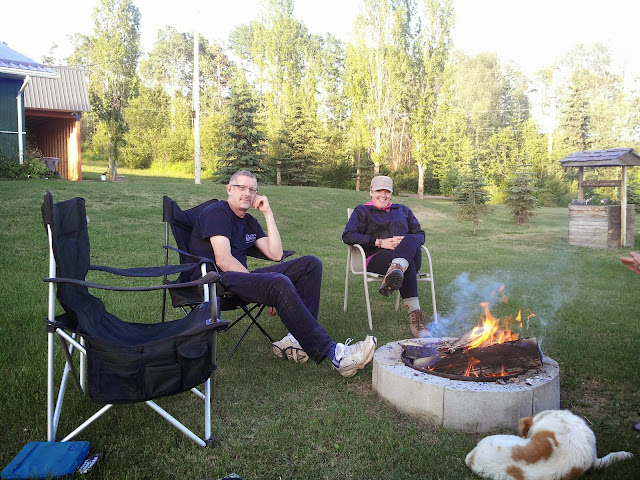 Today was a long haul from kelowna to prince George bc. Today was the day of hot okanagan sunshine warming our way north.
Oh wait.
No it wasnt.
The day dawned with cool rain that lasted until 70 mile house!!! By time we got there my feet were practically swimming.
But the westside road out of kelowna was a beautiful twisty road where we saw a mother deer and three fauns. I also really liked the canyon like landscpe between kamloops and cache creek. (Despite the rain)
By time we finished lunch in 70mile house the weather cleared slightly and we had some sun as far as williams lake.
Then we drove straight into a black abyss of downpour and winds all the way up to PG.
We arrived safe and sound at my sister in laws family's place where we were treated with a delicious meal, conversation and fantastic hospitality. 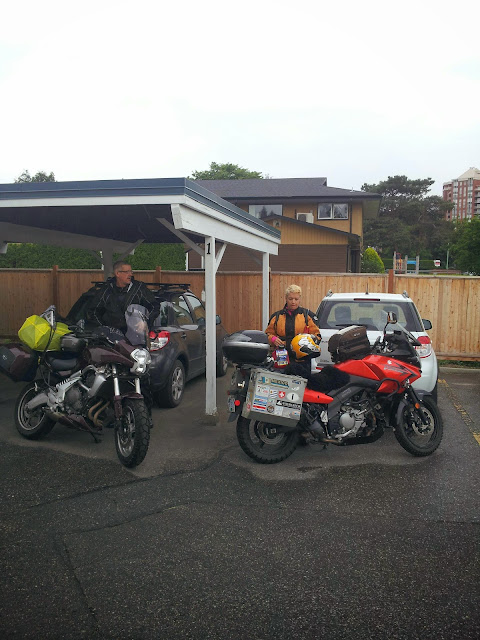 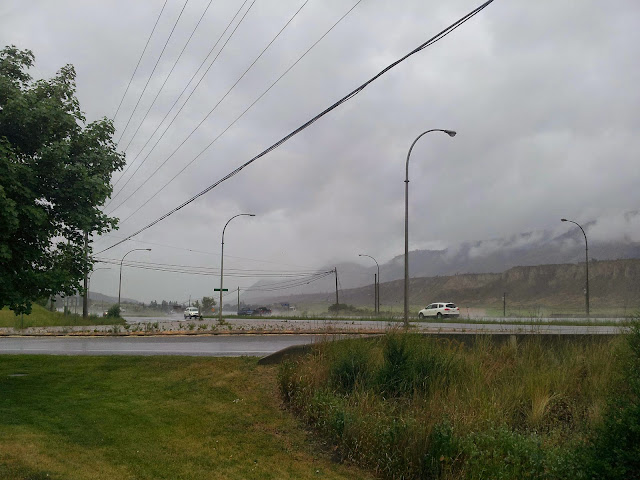 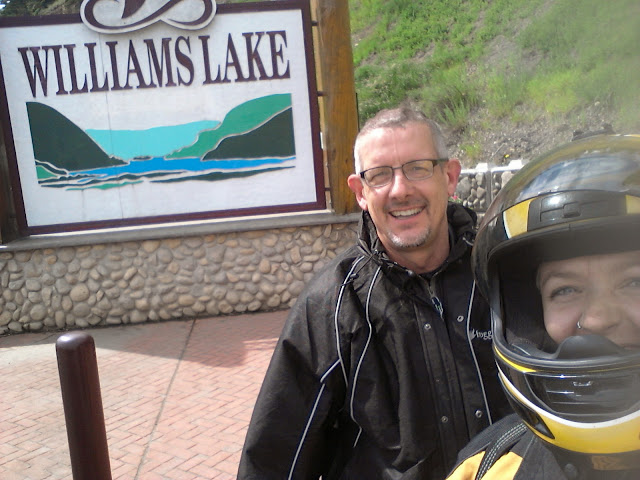 Posted by Nurseneuf at 11:03 PM No comments:

So del has arrived in kelowna today and we have synced our devices, reviewed what tools we packed and looked at maps. I think we're almost ready! We will hit the road in the am and point our noses north. First stop....prince George. 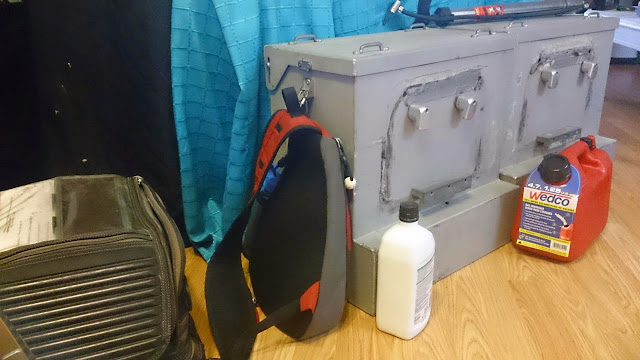 Posted by Nurseneuf at 6:46 PM No comments:

Ok. So del is anyway.....he hit the road this am from newton Kansas! I expect to see him Sunday!  Rubber to the ground friend! ( pls see Michelle s comment from previous post)

Posted by Nurseneuf at 4:21 PM No comments:

so, 4 mennos rode thru baja, mexico back in 2008.
mennobaja.blogspot.com
this trip was planned from that trip.
sadly, two of our mennos can't join us on this one after all. so it's just down to two of us to get our motorcycles to deadhorse and home again.

Del will be leaving kansas soon, and heading north. we will meet here in kelowna, and start our ride together June 24th if everything goes to plan.

so stay tuned if you care to follow
Posted by Nurseneuf at 9:25 PM 2 comments:

Email ThisBlogThis!Share to TwitterShare to FacebookShare to Pinterest
stay tuned as Del and I point our motorcycles north and see how far we can get. 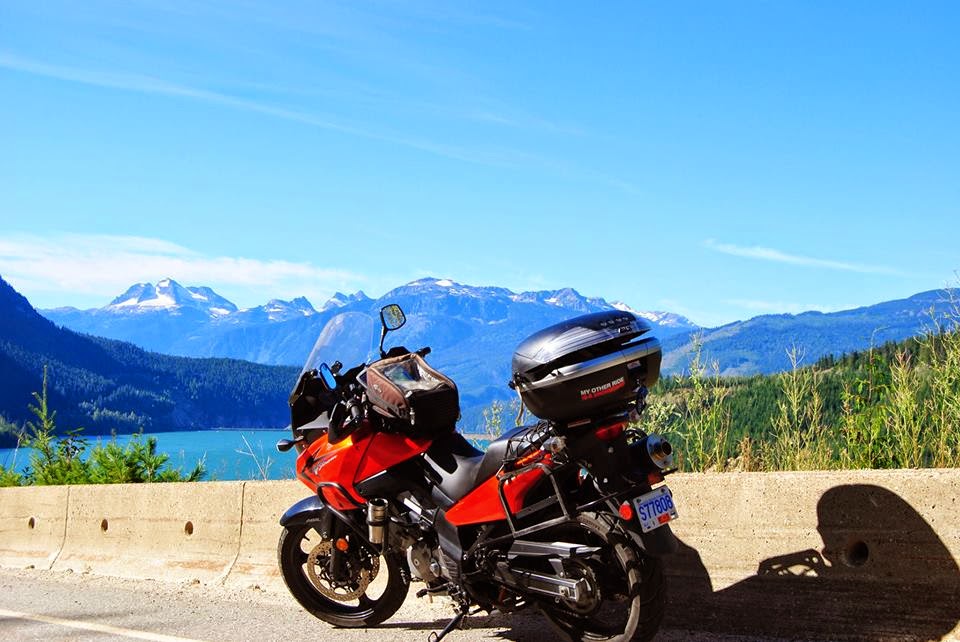