Well...where do we even start? We left fairbanks (thanks patty! ) under sunny skies and headed north to the infamous Dalton highway. Now don't be confused with the word highway. There are very few paved miles due to permafrost damage and the road was only built to reach the oil drilling in prudoe bay. Therefore....this road is a mix of just about every surface imaginable and is a constant stream of construction equipment and oil related trucks. And then there are us crazy tourists that try to conquer this road in our various modes of transportation.
Surprisingly and (debatably) thankfuly, we had blue skies and warm sunshine on our way up. The first 60 miles to yukon river crossing were feeling like a breeze...easily riding at 50mph over packed gravle and spotty pavement. The tiring part is constantly dodging the potholes. And we met the examples of getting lazy for a second and breaking a rim on one. So you have to be en par the entire time. We fueled up and fed up at yukon river and met much of the same kinds of roads to the arctic circle. After the obligatory pictures we saw a couple of dudes roll up..one on a shiny big harley. (In case you're wondering, this is NOT the kind of bike you want on this road) He had his bike parked in front of the sign and with no one near it, the thing just fell over. So we all helped to lift it back up with smirks on our faces.
Anyhoo...60 miles of nicer pavement and gravel we made it to coldfoot, thinking this road wasnt so bad when its dry. ;)
We met another adventure biker there who told us about a camp another 100 miles north, and feeling as good as we were, we decided to carry on. That way we could set up camp a little closer to deadhorse and ride up and back without so much gear on. We camped in a beautiful spot near galbraith lake just over the atigun pass, which we would have enjoyed more if it werent for the swarms of mosquitoes that flew into every open orifice.
That night I tried to get a picture of the midnight sun but unfortunately the clouds had rolled in. :(
By morning the clouds were rolling in but we managed to get to Prudhoe bay dry ..and quite a bit cooler. The bay had only thawed 2 weeks prior and we got our feet in the arctic ocean! ! We saw lots of birds, a couple of Caribou, a fox family but no polar bears (they dont come till aug apparently) or muskox.
By time we left deadhorse after supper the rain had started and our 140miles back to camp turned into a cold wet and very mucky ride.
The rain continued thru the night and after packing up camp wet we inched our way slowly thru this packed road which turns to muck slipperier than snot (the snot theme I carried on thru the whole day). 100 miles took about 3.5 hrs while we constantly tried to keep the bike upright. The atigun pass was completely socked in and we could barely see 2 feet in front of us while our face masks fogged up and we had to ride thru the driving sleet with our faces bare. Then more muck.
We all managed to make it back to coldfoot wet and cold and a little bit shaking.  We enjoyed lunch and hot coffee with a table full of other bikers, swapping stories and getting the scoop on road conditions.
We saw a slight cloud malfunction and made a dash south. The first 60 miles outta coldfoot were drier and more pavement, which felt soooo good. What one thinks are bad roads becomes very relative. ;) on a hill, del noticed his bike was overheating.  We pulled over and he saw his radiator was caked with mud. In the attempt to scrape some clean he also managed to spring a leak. We tried patching it up but even after some help from another couple of bikers it was still dripping. So we loosened the rad cap and limped our way to hotspot...a cafe joint just outside yukon river again. Along the way the silty dirt again had turned to completely amd utterly slimy greasy muck. We both nearly dumped a time or two.. one of mine being right in front of a truck. But we made it to yukon and had a bite to eat at the cafe, where all the truckers hang out. One of whom walked by me and said "I thought you were going down there" (the truck from earlier peril). My reply was "so did I! "
Del also managed to make some friends that had a radiator repair fluid they let him have. So far it works!
So very thankfully, the last 60miles were MOSTLY dry and we hit pavement with huge sigh of relief.  We wound our way along a very nice hwy back into fairbanks where we gratefully showered and slept.
Some TCL for bikes today and we will make our way south again. 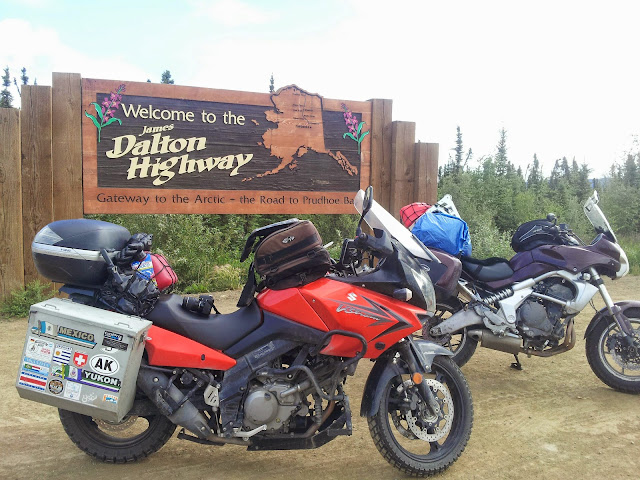 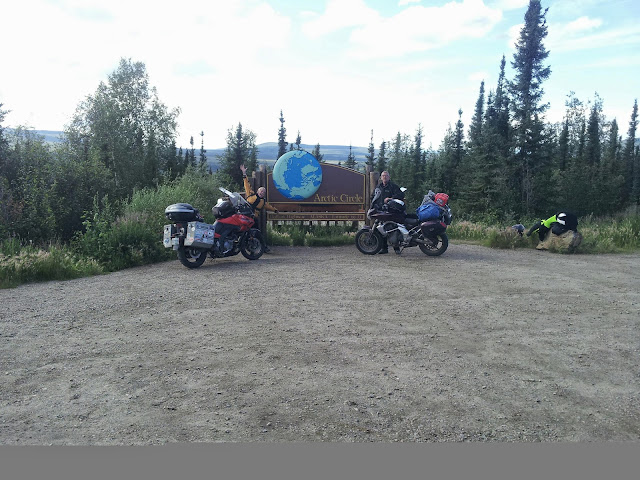 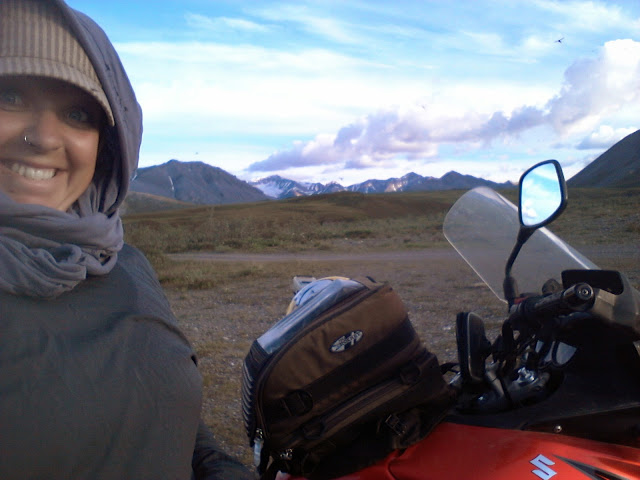 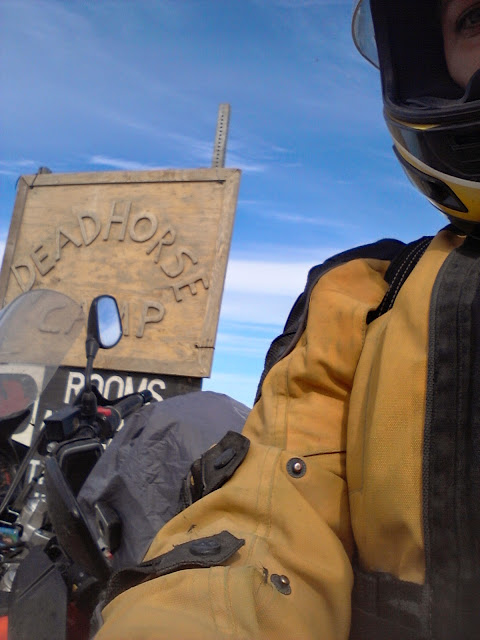 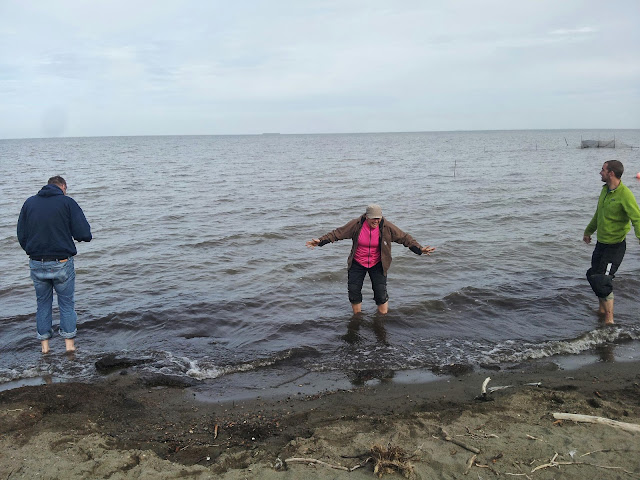 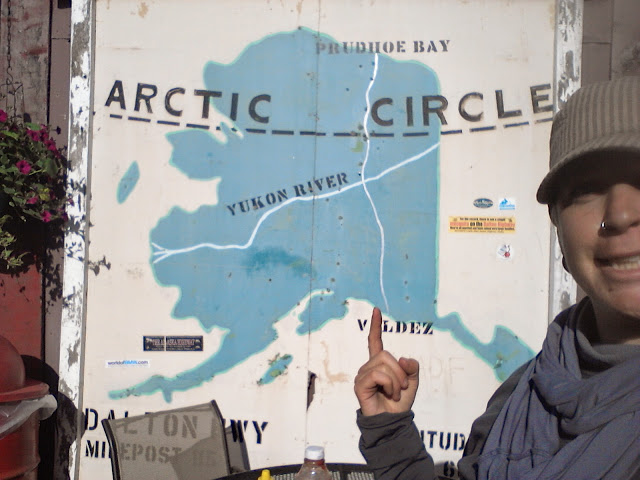 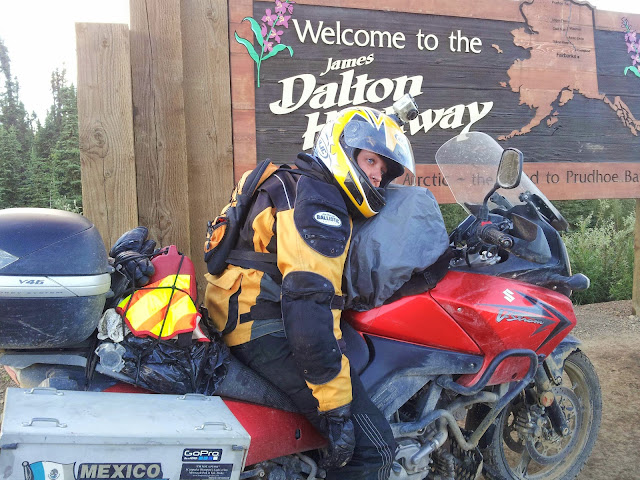 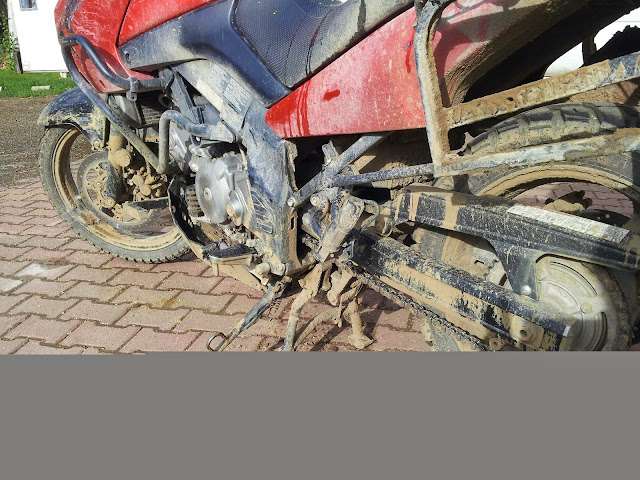